The candidates' best strategies are detailed on the Candidate Profiles page. 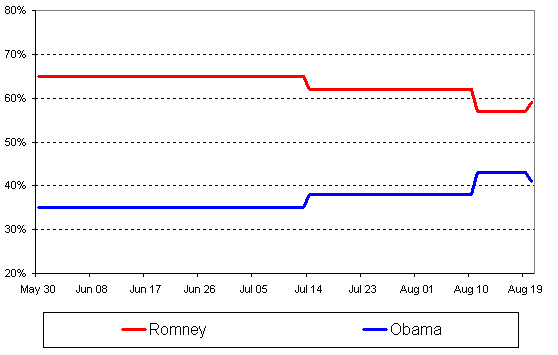 Scenario: "Get America Working Again"
Americans cannot be distracted from what concerns them the most: The miserable state of the economy. Liberal economists attempt to make the argument that the economy is improving, but voters are unconvinced. Having failed to fix the economy in his first term, Obama is unable to persuade voters that he will do any better during a second term. Their only hope is to replace Obama with someone who knows how to get the economy working again. Romney steps into the picture, offering a plausible answer for every problem. When Obama attacks Romney, voters are comforted by Romney's intelligent, confident responses. They ultimately view Romney as an acceptable replacement. With no hope of better days under an Obama presidency, voters see no alternative but to give Romney a chance.

Analysis:
Thus far, reality more closely resembles Romney's winning scenario. Despite the occasional short-term distraction, voters continually rate the economy as their top priority. The state of the economy remains poor, and it is difficult to convince voters that they are experiencing a real recovery. Obama's failure to focus on the economy, and the gridlock in Congress--even when his party held both chambers--make it difficult to sell the idea of a second term with better policies.

Romney has presented himself as an able, intelligent politician and businessman. However, he has not yet explained to Americans precisely what he will do to fix the economy. He has taken some heat from attacks, the results of which have been inconclusive. The selection of Paul Ryan as VP will likely bring further attacks. Still, he currently has no difficulty being viewed as a plausible alternative, and Americans are eager for some kind of change.

Scenario A: "Morning in America"
As time goes on, voters find themselves more and more optimistic about the direction of the economy. Rather than fearing endless stagnation or a return to the crisis of 2008-09, most Americans expect better days ahead. Romney promises a different path, but voters are afraid of changing horses midstream. Instead, they give Obama credit for saving the country's economy from total collapse, and they believe it's worth giving him another four years.

Scenario B: "He Kept Us out of War"
As the election approaches, current events force voters to shift their attention from the economy over to foreign affairs. Romney claims a threat looms on the horizon, and he calls for action. But Americans are uncertain of the danger. Years of war have made them unwilling to make any new commitments overseas. Sensing this, Obama decides not to take any action unless it can be successfully resolved prior to the election. Romney is painted as a hawk who will send American troops into another unpopular war. Given Obama's foreign policy successes, and given voters' relative unease with Romney, Obama becomes the safe option.

Scenario C: "Bush's Third Term"
Romney promises to fix America's economy, but Obama challenges him on the specifics at every turn. Voters are concerned by accounts of "vulture capitalism" during Romney's tenure at Bain Capital. They want to know precisely what Romney would do as president. Obama claims Romney will return the country to the same policies that failed under George W. Bush and led to the economic crisis of 2008-09. When Obama demands to know how Romney would be any different from Bush, Romney stumbles. The more voters look at Romney's plans and positions, the more it reminds them of what Bush already tried. Disappointed, voters see no alternative to Obama: A slow recovery is better than another collapse.

Analysis:
Voters are not optimistic about the extent of the economic recovery. Scenario A remains unlikely, since voters are very much open to a change in direction. Only a significant improvement of the economy would change this. Nor is the stage set for Scenario B. While Romney is given to occasionally indulging in hawkish language, his attention remains fixed on the economy. That could change with news of more nuclear development in Iran, or an attempt by Israel to stop it.

Scenario C remains open, but Obama has so far opted for the class warfare route instead. Romney benefits from being superficially different than Bush in many ways: Intelligent, measured, sophisticated, Northeastern, etc. While Romney will be required to explain his economic plans, the differences between the images of Romney and Bush put an extra burden on Obama to show that Romney's economic policies are a redux of Bush's. However, if voters are sufficiently frightened by Romney and Ryan, the status quo will be the "safe" option.