Now for something completely different.

Still, the fact that Gingrich is now considered among the frontrunners is a remarkable turnaround. Such unlikely transformations reflect the unpredictable nature of the political world. As an illustration, consider the following cartoon from Mad Magazine. Mad is a long-running humor magazine founded in the 1950s. One of its recurring features was to draw a tombstone for a celebrity, with the odds of various causes of death included. Each "death" scenario is intended to poke fun at some aspect of the celebrity's persona.

Here is Gingrich's tombstone, from the August 1998 issue of Mad: 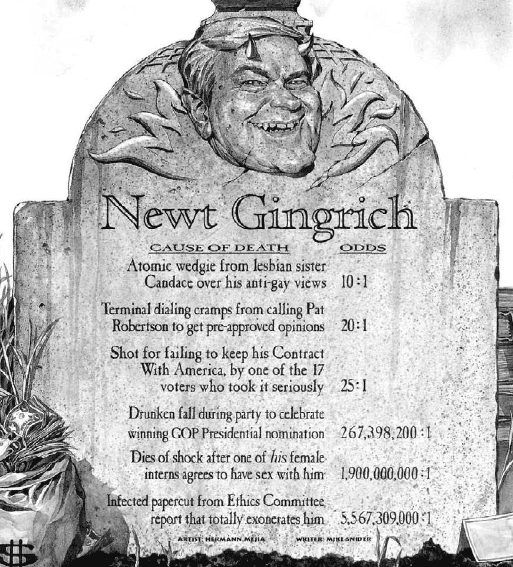 The three unlikeliest events, with odds of millions or billions to one, are ironic in hindsight. In the wake of the Monica Lewinsky scandal, the artist jokes that Gingrich's interns would never sleep with him (unlike the ostensibly charming and attractive Bill Clinton). Unbeknownst to the general public, Gingrich was in fact carrying on his own affair with a Congressional staffer at the time (she is currently married to Gingrich).

The cartoon also references the ethics charges pending against Gingrich. In fact, Gingrich was exonerated. Eighty-four ethics charges were filed against Gingrich, eighty-three of which were later dropped. The remaining charge involved running a college course out of a tax-exempt organization; this would have violated tax law if the course were deemed a political purpose. The IRS later ruled that there was no violation.

Finally, the cartoon jokes about Gingrich's fall from grace in the Republican Party, with heavy odds against his ever winning the Republican nomination for president in the future. Gingrich is still a long-shot, but one never knows...