On July 1st, Barack Obama took the lead for the first time in the Elephant Watcher average of national general election polls. The average is comprised of the ten most recent polls, adjusted for the difference between registered and likely voter polls, and with daily tracking polls added once every three days instead of daily. The polling data and (including the older polls) used to create the chart below may be found on the Polls page. 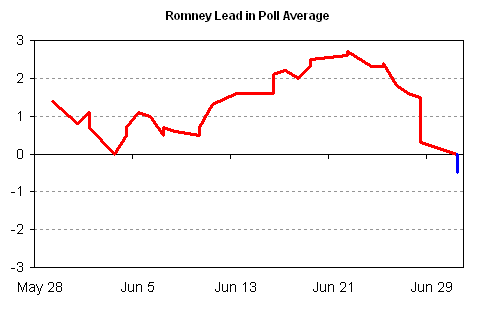 The poll average chart enables us to track the movement of the race at a glance, beginning from the end of May 2012. Note that the race has remained very tight: The poll average has always been within a range of about three points, from half a point in Obama's favor to a little over two and a half points in Mitt Romney's favor.

Romney began with a slight lead, which slowly built up to a peak of 2.7 points on June 22nd. During the ten days after that, his lead fell fairly swiftly. Obama now holds a lead of half a point. It's the first time Romney has lost the lead, though the two candidates were tied briefly in early June. For much of June, Romney appeared to have the momentum. What accounts for the shift? Let's start by ruling out some possible explanations.

The most salient political event that occurred recently was the Supreme Court's ruling on Obamacare, which upheld the law. However, it's unlikely that the ruling helped Obama in the polls--at least, not yet. Romney's peak was June 22nd, and the numbers started moving in Obama's favor before the ruling, which was announced on June 28th. Obama's best polls were conducted just prior to the 28th, or finished on the 28th. The three polls released after the ruling suggest a tied race; they're similar to those just prior to the ruling, or are slightly better for Romney. Obama has only just taken the lead in the average because, as with all moving averages, it takes a few days for the older polls (which were better for Romney) to fall out of the "ten most recent" list and be replaced by newer polls.

Another possible explanation that can be ruled out is the influence of different pollsters. When pollsters are compared to each other, some tend to show more favorable results for Obama and some more favorable for Romney. This unintentional, but persistent, bias is known as a "house effect." A house effect only refers to the bias of a poll compared with other polls; until the election, one cannot know which is the "correct" number. Some poll analysts suggest that Rasmussen and Gallup, which release daily tracking polls, have tended to have a right-leaning house effect this cycle (or to put it another way, other pollsters have a left-leaning house effect). If so, it suggests that a poll average may be tilted if other pollsters aren't releasing enough polls.

While it's true that non-Rasmussen/Gallup pollsters released more polls toward the end of June, which could have been to Obama's advantage, that can't be the full explanation: Obama started doing better even when comparing Gallup polls to earlier Gallup polls, and Rasmussen to Rasmussen. Adjusting for the fact that it's a registered voter poll, Gallup in mid-June showed Romney leading by 4, 5, and 3 points (June 16th, 19th, and 22nd). The two most recent Gallup polls had Obama leading by 2 points (June 28th and July 1st). The Rasmussen polls for the same days have R+3, R+2, and R+5 in mid-June and D+1 and R+2 most recently. Thus, Gallup had a 6-point shift toward Obama, and Rasmussen had a shift of two and a third points. Indeed, the change in these tracking polls accounts for much of the movement.

So if the pro-Obama shift can't be explained by the type of poll or by the Obamacare ruling, what can explain it? Unfortunately, in this case, there isn't any obvious explanation. One possibility is "statistical noise," which refers to the natural up-and-down blips that can be found in any set of data. Using an average of many polls helps reduce the effect of "noise," but it can still be present, particularly in a close, three-point race such as this one. The only way to be certain is to continue following the polls to see if the trend continues or reverses itself.