Romney Wins Wisconsin in a Sweep 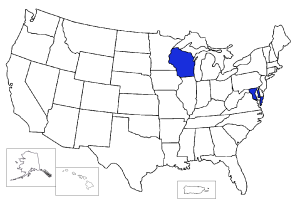 Mitt Romney swept the primaries in D.C., Maryland, and Wisconsin on Tuesday. Romney's colossal win in the District of Columbia was expected, given Rick Santorum's failure to qualify for the ballot. Romney was also expected to win by double-digits in Maryland. For Romney, the real prize was Wisconsin. In mid-February, polls had Santorum leading in Wisconsin by about 15 points. It's a state that would naturally favor Santorum. But after a hard-fought campaign there, Wisconsin went for Romney by a comfortable margin. It is the most devastating loss for Santorum yet. The following are the vote counts as of this writing; news agencies have called all three contests for Romney:

Romney didn't win Wisconsin by a huge amount, but nor was it a razor-thin margin like the one with which he took Ohio, a similar state. Santorum is far behind on delegates, and if he was going to change the dynamic of the race, he needed to do much better in Wisconsin than he did in Ohio. Instead, Santorum did worse. Santorum's final hope--uniting the Anti-Romney vote after beating Newt Gingrich in the South--failed to produce the boost in support he needed.

Santorum's plan to sweep the South and Midwest did not succeed. Romney repeatedly beat Santorum in the Midwest (Michigan, Ohio, Illinois, Wisconsin), all while continually increasing his margins in the Northeast and West.

Romney can persuasively argue that his nomination is inevitable. Santorum's campaign has conceded that they are unable to accumulate a majority of the delegates, and can only hope for a contested convention. This further reduces Santorum's appeal to Republican voters, most of whom care far more about defeating Barack Obama than nominating Santorum.

If Santorum had a realistic chance of winning the nomination, there was no reason for him not to win Wisconsin. It is a pro-Santorum state, he had plenty of time to campaign there, and Gingrich did not split the Anti-Romney vote. Santorum now has no logical reason to believe he can win the nomination. He can only hope for a miracle.