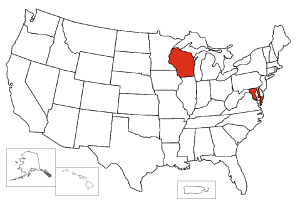 Three primaries will take place on Tuesday: Wisconsin, Maryland, and Washington, D.C. Recent polling indicates Mitt Romney will win all three contests. This will be the last series of contests for another three weeks, after which a host of Northeastern states will vote. It's Rick Santorum's final opportunity to stop the delegate math from favoring Romney so overwhelmingly that observers conclude Santorum is wasting everyone's time. While the April calendar is stacked in Romney's favor, Wisconsin was supposed to provide Santorum with a counterweight: In its natural state, Wisconsin is pro-Santorum. Santorum has poured all available resources into Wisconsin, with apparently no reward for his efforts. A loss in Wisconsin would be devastating to Santorum because if he can't win there, he won't be able to win anywhere--except for Southern Anti-Romney states and his home state of Pennsylvania. A loss in Wisconsin now appears likely:

Romney holds a lead in every single poll, mostly in the high single-digits. Santorum tends to overperform his poll numbers because some of Newt Gingrich's voters shift to the chief Anti-Romney at the last minute. But aside from the WeAskAmerica poll, Gingrich has already fallen into single-digits, which is where he ended up in Illinois' vote. Thus, Santorum can only hope for the polls to be far off the mark. Because this is a primary rather than a caucus, and because there are so many pollsters reporting similar results, the polls are likely to be accurate.

If there was any hope that Maryland wouldn't vote like a Northeastern state, the polls don't offer it. Romney is ahead by a tremendous margin in Maryland. In D.C., there has been no polling, but Romney is guaranteed to win because Santorum isn't on the ballot. Thus, Romney is likely to win in Wisconsin and win by huge numbers in the other two contests tomorrow. Obviously Maryland and D.C. are pro-Romney, but Wisconsin should have been pro-Santorum. For most watching these results, it will be difficult not to conclude that the race is all but over.