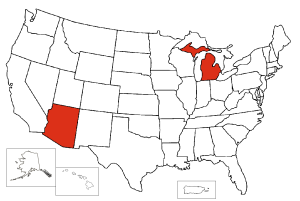 Arizona and Michigan will hold their primaries tomorrow. These will be the first major contests since Rick Santorum won three states on February 7th and began his long-awaited surge in the polls. Arizona has largely been ignored by the media, as Mitt Romney is expected to win there easily. Michigan, on the other hand, has gotten a lot of attention. If Romney loses to Santorum, it will be viewed as a big loss; if he wins, it will be viewed as a comeback--until the contests on the following "Super Tuesday" overshadow everything. Either result is possible, as the polls in Michigan show an extremely close race. The following are the most recent polls conducted in Arizona and Michigan:

Judging by these numbers, Romney will indeed win Arizona as easily as had been expected. The Mormon vote is not quite as big a factor in Arizona as it was in Nevada, but Western states continue to be a Romney stronghold. It's a decent recovery for Romney after his loss in Colorado on February 7th. However, Newt Gingrich still has a healthy amount of support in these polls. Some number of Gingrich supporters should make a strategic defection to Santorum on voting day, so Romney's margin of victory may be smaller than the polls anticipate.

Romney leads in all but two of the most recent Michigan polls. But his margins are -2, -1, +2, +2, and +4 in the February 26th polls. Moreover, according to the two polling firms that conducted surveys on both February 23rd and February 26th, Romney's margin shrank by 4 and 5 points. The defection of voters from Gingrich to Santorum, extra enthusiasm for Santorum, and a last-minute shift of momentum to Santorum are all possibilities. Thus, despite Romney's small edge in the polls, the race is simply too close to call. Whoever the winner is, the race will be very close.

There's good news to be found for both Santorum and Romney. First, for Santorum: He's secured his position as the chief Anti-Romney. Gingrich still has support, which means that further defections are possible. If Santorum beats Romney in Michigan, this should accelerate. Michigan was his first head-to-head battle against Romney, and despite Romney's money/infrastructure advantage, Santorum is extremely competitive or winning in Michigan. On top of that, Michigan is more pro-Romney than other Midwestern states. Winning there or coming close means Santorum should be favored throughout the Midwest--most importantly in Ohio.

Now the good news for Romney: Strategically, he is well-positioned. His numbers in Arizona and Michigan suggest he is competitive in the Midwest (Santorum's region), while Santorum is uncompetitive in the West and Northeast (Romney's regions). If Romney wins Michigan, Gingrich may get a boost in the South, having proven that Santorum is unable to beat Romney--just as Santorum got a boost after Gingrich failed to win in Florida. Going forward, Santorum is likely to become weaker, because thus far he has benefited from not being vetted. Santorum's electability weakness due to his extreme social conservatism will be more widely known in the future than it is now. If Santorum wins Michigan, there will be a greater incentive for this information to be made known by the media, Republican establishment, and Romney's campaign. A similar phenomenon took place after Gingrich won South Carolina.