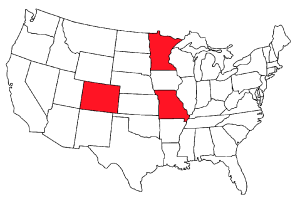 Voters in three more states will vote tomorrow, in Colorado, Minnesota, and Missouri. (The Missouri contest is a strange one--it won't count, and the real Missouri Caucus will be held in March. This is just another example of how each state running its own contest by its own rules allows for a lot of quirks.) Mitt Romney will experience the burden of a frontrunner in these contests. If he wins them, they will receive relatively little coverage: The media have decided that the primaries in Arizona and Michigan being held at the end of the month are more worthy of attention. But if Romney loses these states, then they will be considered noteworthy, particularly if Rick Santorum beats him. That's because the current narrative is that Romney is the inevitable nominee and Santorum is a lower-tier candidate. Any result that challenges that narrative will cause the dynamic to shift.

We have seen before the way in which the media overreacts to every development in the race. When Newt Gingrich won South Carolina, the same media that had been talking a week earlier about a Romney steamroller began saying that Romney had run a terrible campaign. Upon Gingrich taking South Carolina, Elephant Watcher predicted that if Romney won Florida, the media would turn against Gingrich just as quickly, declaring Gingrich can only win Southern states. The media have indeed turned against Gingrich and renewed the "Romney is inevitable" narrative.

In the same way, if Romney does poorly in tomorrow's contests, they can just as easily begin trumpeting the notion that Romney is a lousy candidate. More importantly, if Santorum beats Gingrich, Santorum can get back into the race. Otherwise, the three contests tomorrow are considered minor events. If Nevada got little polling, tomorrow's states have gotten virtually nothing. PPP (D) has conducted a poll in Colorado and Minnesota. There is no polling data on Missouri, where Gingrich will evidently not be on the ballot.

Both Colorado and Minnesota were won by Romney in 2008, even after Romney had lost in Iowa, New Hampshire, South Carolina, and Florida. In theory, Romney ought to do very well in both states this time around. The Colorado poll suggests an easy repeat victory, but Minnesota will be more difficult.

However, without more polling data it's impossible to be sure. Santorum leads in the only poll. Interestingly, the Intrade market on Minnesota doesn't believe the poll: It has Romney with a 70% chance to win. PPP is a Democratic polling firm, and its track record is mixed. PPP did well in its polling for South Carolina, but did badly in Iowa and Florida, and pretty badly on the lower-tier candidates in Nevada. It's also been said that caucuses are more difficult to poll than primaries.