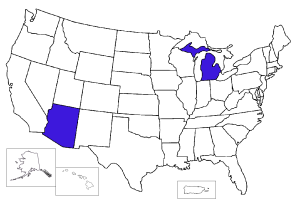 Mitt Romney had an outstanding night on Tuesday, winning the primaries in both Arizona and Michigan. In Arizona, Romney was expected to win; his competitors essentially ceded the state to him and didn't compete there. Romney won Arizona by a wide margin, 22 points. Though less attention was paid to Arizona given Romney's inevitable win, it's a valuable state in delegate math: Arizona is one of the few winner-take-all states prior to April. The big story was Michigan, where Romney prevailed in his bitterly-fought contest with Rick Santorum. Santorum had nearly a double-digit lead in Michigan polls coming off his three-state sweep in early February, but Romney came back to defeat Santorum by 3 points.

The following are the current vote tallies:

What's the significance of Romney's wins in these two states? Strategically, Romney demonstrated that he was unassailable in his own region (the West) and able to take a state from Santorum's region (the Midwest). But Michigan is considered one of Romney's home states, so Santorum will argue that other Midwestern states--like Ohio--will be a different story.

Although Romney's home state advantage in Michigan is probably overstated (Romney is variously described as having Michigan, Massachusetts, New Hampshire, or Utah as his "home state"), it's true that Michigan was more favorable terrain than other Midwestern states will be. But a more important factor suggests that the campaign could get easier for Romney: Santorum is still, for the most part, unvetted. In particular, Santorum's electability has not been called into question--Romney's campaign focused instead on attacking Santorum's conservatism. And the media's scrutiny of Santorum will only increase. Thus far, Santorum has enjoyed the benefit of the doubt. Nationally speaking, Santorum will never have it this good again.

In terms of media perception, Romney will be portrayed as having achieved a comeback. Santorum's enduring strength will be called into question. It was important for Santorum to get the win, even if he will get a share of the delegates anyway. Perhaps that's why Santorum made the risky gamble of encouraging Democrats to vote for him in Michigan. In doing so, Santorum drew more attention to the effort among some Democrats to vote for Santorum in order to sabotage the Republican primary. The Democrats' scheme gave Santorum some extra votes, but it could backfire badly: It plants the seed in the minds of Republican voters that voting for Santorum will help Barack Obama. That hurts Santorum's electability argument, and by asking for Democrats' votes, Santorum hurt his own conservative credentials as well.

Going forward, Newt Gingrich's support in the South is the wildcard. If Santorum had won Michigan, it would have reinforced the idea that Santorum is the man who can beat Romney. That would have helped Santorum in the South, where he could persuade pro-Gingrich voters to stop splitting the vote and join the Santorum bandwagon. Now, Gingrich will be able to make the case that Santorum shouldn't be the chief Anti-Romney. Recall that after Gingrich's losses in Florida and Nevada, Santorum was able to flip the Anti-Romney vote in his favor. Will Gingrich be able to do the same? Probably not, but he may retain enough strength to win Georgia on Super Tuesday and eat into Santorum's support in other Southern states.