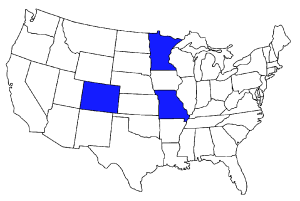 Rick Santorum won a clean sweep of the three states holding contests on Tuesday, winning Colorado, Minnesota, and Missouri. Although no delegates were awarded (CO and MN were non-binding caucuses, and MO's actual contest is in March), it's almost beside the point: Santorum needed something dramatic to get him ahead of Newt Gingrich and back into the race, and he got it. Reporting suggests that Gingrich had skipped these states to focus on the Southern contests later down the road, and that Mitt Romney--with campaign in full "delegate mode"--largely ignored these contests to focus on Arizona and Michigan, which will be held at the end of the month. Meanwhile, Santorum had skipped Florida and Nevada to focus on Tuesday's states. But the results reveal more than just the campaigns' different strategies:

The strength of Santorum's wins, particularly in Minnesota and Missouri, reveal three things. First, it shows weakness on Romney's part. While he may have skipped these contests, he ought to have done better considering the momentum he built up from his early wins and Santorum's early losses. Romney also has reason to be concerned about his relative strength compared to Santorum in the Midwest (IA, MN, MO). Romney's failure in Minnesota makes it especially clear, considering he won that state in 2008 after having lost big in Iowa, New Hampshire, South Carolina, and Florida.

The second thing the results reveal is the weakness of Gingrich as chief Anti-Romney. If Tuesday was a bad night for Romney, it was fatal for Gingrich. The voters in these states seem to have taken Santorum's central campaign argument to heart: Gingrich won't beat Romney, so another alternative is needed. Even without having won delegates, the perception of the race will shift, causing Gingrich supporters to jump on the Santorum bandwagon. Santorum's numbers will surge.

The third item revealed in Tuesday's results is that Santorum is unvetted. He has not been subject to any media scrutiny or negative ads by the other candidates. The race has returned to its old pattern, with yet another Anti-Romney surging. Back in December, we explored the question of why candidates kept surging and crashing. The answer is that voters assume each new candidate is both highly conservative and highly electable. But because no candidate in the field possesses both those qualities, their numbers crash once the candidate's weaknesses are revealed. Santorum's late surge in Iowa was blunted, and he was never considered a threat. He is the last candidate to have a surge--and crash.

What happens next? After the non-binding Maine Caucus ends this Saturday, there will be a debate on February 22nd and the next two primaries will be in Arizona and Michigan on February 28th. In the meantime, Romney's campaign, which must feel like it is playing whack-a-mole, will begin attacking Santorum and heavily campaigning in AZ and MI.

If Santorum emerges from his vetting unscathed and does well in AZ/MI, his odds of winning the nomination will increase substantially. Otherwise, he will crash and the campaign will shift back into Romney's favor. In such a case, Santorum's surge will have actually helped Romney, because the Anti-Romney vote will become even more split than before.