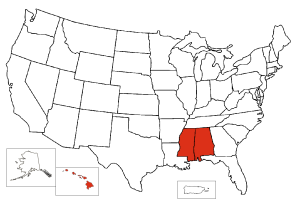 Two states in the Deep South--Alabama and Mississippi--will hold important primaries tomorrow. Hawaii and American Samoa will also hold caucuses tomorrow; Mitt Romney is expected to win those easily. The focus of all attention will be the two Southern state primaries, where polls are currently ambiguous. Alabama and Mississippi are must-win states for both Newt Gingrich and Rick Santorum. Since Gingrich's entire "strategy" has been based on winning in the South, and since he so far has only been able to win in the Deep South, he will have little excuse to remain in the race if he fails to carry at least one of the primaries tomorrow. Gingrich has claimed that he will stay in the race regardless, but he has to say that because saying otherwise would be a sign of weakness. If Gingrich loses both Southern states, he may very well drop out of the race.

Santorum needs both Alabama and Mississippi just as badly. His campaign is in dire straits, with more and more observers coming to the realization that he simply cannot make up his deficit in delegates. His only hope is to force Gingrich out of the race. If Gingrich wins even one of the states, Gingrich will remain a thorn in Santorum's side and drain his Southern delegate count. If Romney somehow manages to win one of the states due to a split in the Anti-Romney vote, it will still be devastating. On the one hand, it would weaken Gingrich and strengthen Santorum's argument that the Anti-Romney vote needs to unify. But on the other hand, it would give Romney even more delegates, the impression that he can sort of compete even in Anti-Romney country, and would add to Romney's aura of inevitability.

As stated, the polls are ambiguous:

The polls show a three-way virtual tie in Alabama. In Mississippi, the race is also extremely close among all three competitors, though Santorum is a bit weaker there than in Alabama. Will Romney manage to pull out a win due to the even division between Anti-Romneys? Or will the voters strategically shift their votes toward one of the Anti-Romneys? If so, which one will they choose?

Alabama's numbers, at least, resemble the polls out of Tennessee before its primary on Super Tuesday. When the voting occurred, Gingrich supporters shifted over to Santorum and gave him an easy win. Will it happen again? On the Intrade primaries market, investors are dubious of Santorum's chances. They give Santorum 30% to win Alabama and only 17% to win Mississippi. Gingrich is favored in both states, with 50% and 60%, respectively.

Despite the polls, Santorum has a real chance to win either or both of the Southern primaries tomorrow. That's because Santorum has clearly become the chief Anti-Romney around the country, and voters everywhere know it. So if voters are going to strategically shift to beat Romney, it's going to be Gingrich supporters going to Santorum, rather than the other way around. Thus, although any combination of the three candidates could win the two primaries, Santorum should be given more of the benefit of the doubt than he has so far. If he does win both, the low expectations will ultimately be to his benefit. If he loses either primary, it will be a disaster for Santorum. For Santorum to win the nomination, the delegate math currently requires that everything go perfectly for him.