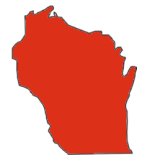 Next Tuesday, on April 3rd, primaries will be held in Washington D.C., Maryland, and Wisconsin. Thus far, no polling has been conducted in D.C.; Mitt Romney is expected to win there since Rick Santorum is not on the ballot. In Maryland, only one poll has been conducted (yesterday by Rasmussen) showing Romney ahead of Santorum by 17 points. Given Maryland's status as a Northeastern state, Romney was always expected to win there. That leaves Wisconsin, a Midwestern state where Santorum should win if he is to have any real chance at taking the nomination--or even of forcing a contested convention. Wisconsin is on Santorum's turf. In February, polls gave Santorum a big lead there. But now, Romney has the lead. A few more Wisconsin polls should be released prior to the vote, but here is where the candidates currently stand. The two recent polls are included, and for contrast, so is the final February poll:

The race has changed dramatically since the February poll, which was conducted just days before Romney's crucial wins in Michigan and Ohio. In February, Santorum had a lead of 16 points; now Romney has a lead of about 10 points. This shift toward Romney is consistent with the shifts that have occurred previously: Santorum lost big leads in Michigan and Ohio before he was defeated by Romney.

Losing Wisconsin would be devastating for Santorum's campaign. As desperate as the situation already is, things would get even worse. Like Ohio, Wisconsin is a state where Santorum has no excuse for not winning. Santorum's campaign will be considered in free-fall, especially if he loses by a convincing margin. If that weren't bad enough, Wisconsin is one of Santorum's best states on the April calendar. He needs to win Wisconsin, if only to take one step toward counterbalancing the effect of his other losses.

Unfortunately for Santorum, there's no particular reason to think that he will be able to turn things around and defy the polls. His usual trump card for beating the polls is to benefit from the strategic defection of Newt Gingrich's supporters, who hope to coalesce the Anti-Romney vote. But Gingrich is already down to about 6 points in the polls. At least in Michigan, Ohio, and Illinois, Gingrich had been polling double-digits, so there were some votes to be had. In the Wisconsin polls, there just aren't many Gingrich voters to defect.

Wisconsin may well be the final battleground. True, there are many states to follow. In May, there are several states that heavily favor Santorum, and there are additional states throughout the calendar that will be competitive. But if Santorum loses Wisconsin, the nature of the campaign will change in a fundamental way. No longer will anyone seriously consider Santorum able to win the Republican nomination. Even Santorum's most faithful supporters will abandon hope of victory.