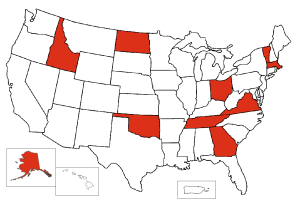 Tomorrow is Super Tuesday, the first of the big multiple-state contest days. Ten states will vote: Alaska, Georgia, Idaho, Massachusetts, North Dakota, Ohio, Oklahoma, Tennessee, Vermont, and Virginia. These states can be broken down into a few categories. There are the states Mitt Romney is very likely to win (Idaho, Massachusetts, and Vermont, as well as Virginia--because only he and Ron Paul are on the ballot); the state Newt Gingrich is very likely to win (Georgia); the states Rick Santorum should be favored to win (Oklahoma and Tennessee); the wildcards (Alaska and North Dakota); and the big prize battleground state (Ohio). The candidates' strategies remain as they were in February. Romney needs the West, Northeast, and to break into the Midwest. Santorum needs to sweep the South and the Midwest. Gingrich and Paul have no path to victory. What do the polls say about how well the candidates will execute these strategies on Super Tuesday?

First, Romney looks good on his "lock" states, though there's been no polling of Idaho and little of the others on his list:

Gingrich is doing well in his home state of Georgia. He was in some danger of being usurped by Santorum, but Santorum's decline has been to Gingrich's advantage:

Somewhat fittingly, there has been no polling of the wildcard states (AK and ND). There's no telling how they'll vote, but the overall momentum has been toward Romney. Santorum can't count on those states, so his attention must remain focused on the states where he needs to win:

Tennessee is a weak link for Santorum. He needs to win there to establish his supremacy over Gingrich in the South. But Gingrich has been rising of late and could potentially win. Normally Santorum would be able to count on the late defection of Gingrich voters to put him past Romney, but Gingrich is nearly taking the lead--not trailing far behind. If Romney or Gingrich won Tennessee, it would be a complete disaster for Santorum. Arguably, it would be even worse if Gingrich won, because Santorum would potentially lose his position of chief Anti-Romney. Romney would love to see Gingrich have another resurgence, because unlike Santorum, Gingrich can't challenge him in the Midwest.

That's been the fundamental problem facing Santorum: He has a challenger in both of the regions he needs to sweep (Romney in the Midwest and Gingrich in the South). The states chosen for Super Tuesday only compound this problem. Of the four Southern states, one is uniquely favorable for Gingrich (Georgia), and another is off the table because only Romney and Paul are on the ballot (Virginia). On top of that, there's only one Midwestern state in play, so Romney can focus his money/infrastructure advantage there. Speaking of Ohio:

The recent shift toward Romney is seen in the Ohio polls. At Santorum's height, Romney was trailing by as much as 18 points in some polls. Now they are about tied, with Romney a slight favorite. Losing Ohio would be a crushing blow for Santorum. Unlike Michigan, Santorum could not spin the result, because there's no reason why Ohio should favor Romney instead of him. If Santorum loses this important Midwestern state, it means his regional strategy has unraveled. There's only one silver lining in these polls: There are still plenty of Gingrich votes that could defect to Santorum at the last minute.