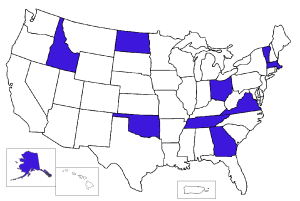 After a lengthy counting process, Mitt Romney finally emerged as the winner of a tight race in the Ohio Primary. Romney beat Rick Santorum 38% to 37%. (Romney also won a close race in the Alaska Caucus.) The Ohio polls had Romney with a slight edge going into election day, but as expected, Santorum got a few points from Newt Gingrich supporters who switched at the last moment. It was very close, but not enough to win. In winning the state, Romney avoided another round of the media narrative that he is a weak frontrunner, and he denied Santorum some much-needed momentum enhancement. The results of each of the Super Tuesday states may be found on the Primaries page.

Because the polls turned so quickly after Michigan, the media never quite picked up on how big the shift was that allowed Romney to win. Prior to Romney's win in Michigan, Santorum led in Ohio polls by a margin of 7-18 points. Unlike Michigan, which was a fairer fight due to Romney's ties to the state, Ohio was Santorum's to lose. That Santorum did lose in Ohio reflects the overall national shift toward Romney taking place; Romney benefits as Santorum is increasingly vetted. Santorum losing Ohio would be akin to Romney losing New York--there's no excuse for it. Santorum may complain that he was outspent by Romney, but the outspending will continue.

To win a majority of the delegates, Santorum needs to win the South and the Midwest. Indeed, he needs to win those states by larger margins now that Romney's margins of victory in the West and Northeast are increasing. Santorum has been unable to break into Romney's strongholds in the Northeast and the West. Now that Santorum is also losing some states in the South and some in the Midwest, it's difficult to see his path to victory.